Maybe we have already moved away from paper, but that's just a medium, the object of every day is paperwork, we always have more than what we want, and I'm sure that most of it is really needed.

The best way to convey accords is through paperwork, it helps us define scopes, times, wages, benefits, obligations and rights. We can't keep them in our heads, and it's hard to transmit.

Companies need them, but the hassle of making each document is way too much and most companies lose focus on building and reviewing them so we kind of forget the long term benefits because of this.

From my experience, we face two critical moments. The first one is when we decide to create a proposal, getting all the information is part of the job, but when its gathered, and we need to move along, the process of creating them, passing them on to the correct reviewers, not having anything public, and delivering them on time is tiresome. As hard as we try, we take much longer than we hope for the document to be delivered. The second problem come much further into the future. Say we nail it and we get selected and we build the contract, we pass it through the same process all over again and we work on it. Someway down the line we will need to check the contract, most of the time because something gets out of scope and we need to address the document to check who is right about a definition. Then, all of a sudden, we realize that we have 3 copies of the contract, and we are not sure which on is the official one.

That's why we decided to take parts into the matter and developed Rogue, which we now promote it as Rapidocs. Rapidocs is a simple tool where you define processes, like reviewing a contract. With Rapidocs you define each step of the process: what name is the best (naming things is hard as you probably already know), what it is expected to be reviewed in that particular step, who should review it and how many reviewers need to approve it in order to pass it to the next stage. Oh, and so important how much time this process should take.

After the process is defined, a review takes place. It starts with uploading the document and giving a small context, because most of the time the document has a more extensive wording and maybe a couple of paragraphs help the inner team to define it better. Then the document goes to the people which have the roles required in the next step, and they can approve it and get it going, or rejected -with a proper explanation of the rejection- and the process stops and must be started again. Some roles may pass on the review process given there is more people available to sign off on the step.

We chose to have hard rejections because if any part of the document should be rejected then it means that the document is now invalid and a modification must take place, so there is no point of proceeding with the current file. 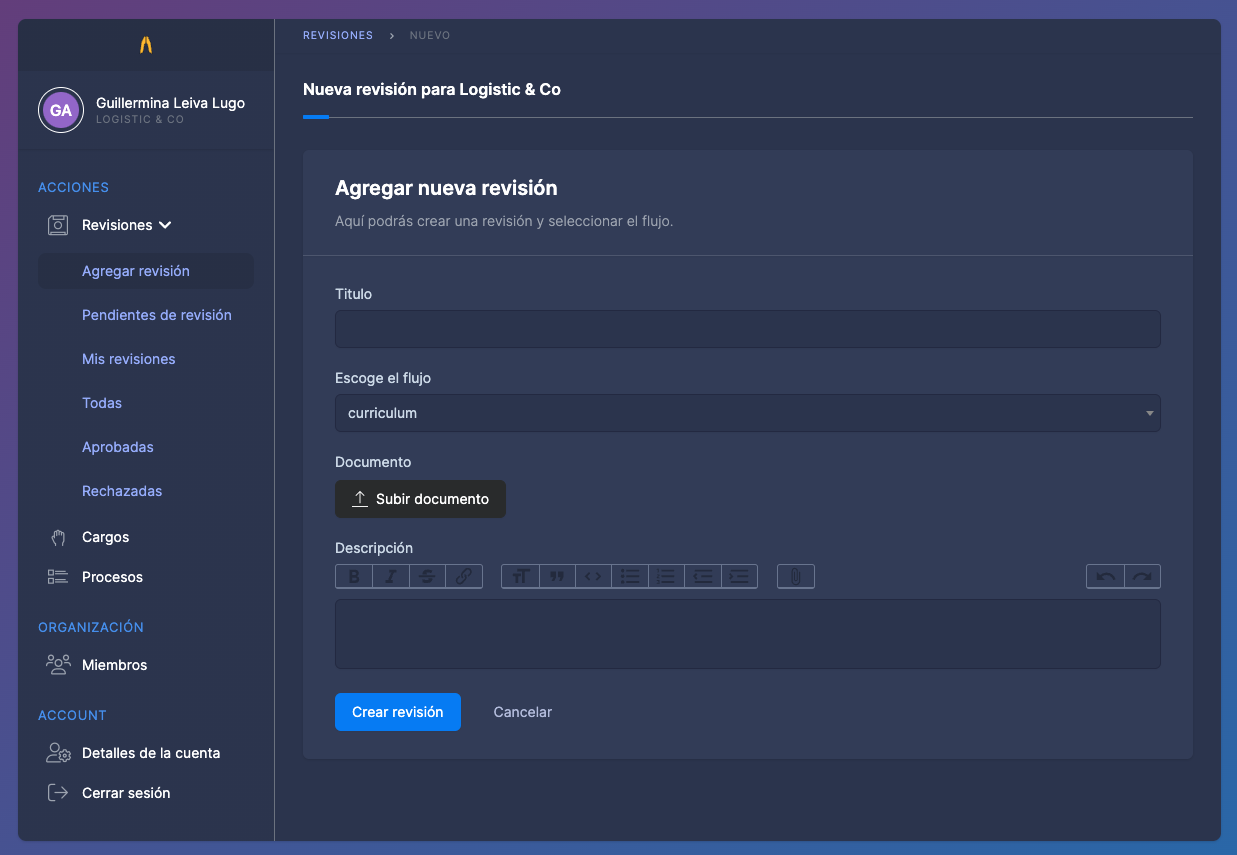 We also chose to have people pass on the approval step, just because there could be an issue, for example, a step that requires the approval of two legal advisors, but there are three in the team and one of them checks the document and realizes that she is not the most qualified reviewer for that document, but she complies with checking it. Now, the rest of the team is forced to either approve of reject.

Finally, all these documents are now marked as the final approved one of rejected, so you know exactly where to find the correct document, even if a long time has passed before checking on it again. This eliminates the typical situation that the last contract was on the email from someone that left the company.

Rapidocs also can upload additional documents, so maybe you have your company approved document, then you have to sign it elsewhere, so you upload the signed document as an addition to the process as a final step. Or maybe you have to attach another kind of document: an annex or a proof or purchase or approval.

But its not just contracts, because I told you: paperwork is everywhere. It can also help to streamline internal requests, reimbursements, product deliveries, managing credit approvals, anything that needs more than one pair of eyes to review it.

One of our main competitors are generic process systems and storage solutions, like Trello, ClickUp or Sharepoint. These are wonderful tools but the lack the control or they really need a ton of customizing and automation that usually renders them inadequate to the user's needs. Let me give you an example, the previous example: you can have the contract approval process on a Kanban, but everyone can check on the document on any stage, and someone could just slide the document to a later stage without knowing, or someone could reject the document and forget to write why is being rejected. You can check the logs, but that just goes back to a lot of manual and undesired labor that you could just avoid using Rapidocs.

We have just started, but we have already a hefty backlog, one that focuses on simplifying the organization's processes and we expect to keep it simple. You can learn more about it and join the Early Adopter stage on Rapidocs.app